Under new management: the Royal Australian Navy and the removal of Germany from the Pacific, 1914-15 by Ian Pfennigwerth

MHHV > Articles > World War One to 1939 > Under new management: the Royal Australian Navy and the removal of Germany from the Pacific, 1914-15 by Ian Pfennigwerth

At the outbreak of WWI in August 1914, the Australian Fleet and the Australian Military Expeditionary Force (AN&MEF) were tasked to remove the German presence from the Pacific. The maritime component of the mission centred on Vice-Admiral Maximilian von Spee’s German East Asiatic Cruiser Squadron and the land component centred on seizing and occupying German colonial possessions in the Pacific. The German wireless installations were critical as they relayed intelligence to von Spee’s Squadron so that it could threaten merchant shipping in the region. 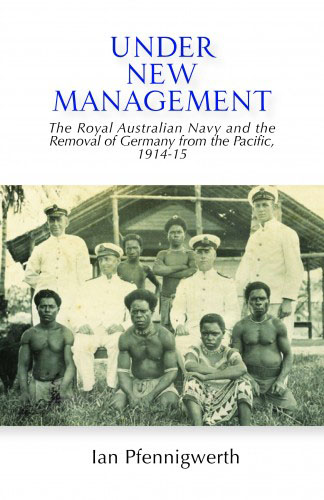 Under New Management provides a detailed account of the ‘campaign’ including the maritime operations as well the amphibious operations. Ian Pfennigwerth provides useful opening chapters on the history of the German influence and presence in the region as well as the history and development of the RAN to set the scene.

The Australian Fleet was commanded by Rear-Admiral (promoted to Vice-Admiral during the campaign) Sir George Patey, RN, whose flagship was HMAS Australia, a state-of-the-art battle cruiser that was the only ship in the Pacific that could outgun the two armoured cruisers of the German East Asiatic Cruiser Squadron.

The AN&MEF was commanded by Colonel William Holmes. The AN&MEF comprised one battalion of infantry of 1,000 men enlisted in Sydney plus 500 naval reservists and ex-sailors who would serve as infantry. Another battalion of militia from the Queensland-based Kennedy Regiment, which had been hurriedly dispatched to garrison Thursday Island, also contributed 500 volunteers to the force. The objectives of the AN&MEF were the German wireless stations and posts at Rabaul, Madang, Kavieng, Nauru, Manus Island and Kieta.

After the successful seizures Australia established a military occupation government in New Guinea which continued until 1921 when the Australian Government received a mandate from the League of Nations to govern the territory. Australian administration lasted until 1975 when Papua New Guinea gained its independence.

The German East Asiatic Cruiser Squadron was chased out of the Pacific and when the Emden was run aground on 9 November 1914 the German presence in the Pacific came to an end. It was an early mission accomplished in a war that would sadly draw out for another three years. Indeed, the campaign’s success might have inadvertently elevated expectations for success in the upcoming the campaign at Gallipoli.

Pfennigwerth is a seasoned historian and former RAN officer. His previous books include: In Good Hands: The life of Dr Sam Stening, POW; A Man of Intelligence, A biography of the Australian code breaker Captain Eric Nave; The Australian Cruiser Perth, 1939 – 1942; and Tiger Territory, The Untold Story of the Royal Australian Navy in Southeast Asia from 1948 – 1971.

Under New Management includes a number of black and white illustrations as well as several maps of generally good quality. It includes a bibliography and an index as well an appendix providing details on all the Allied and German ships involved in the campaign.

Under New Management is recommended to those with an interest the opening moves of WWI in the Pacific. It has appeal to both military and naval historians and also provides an insight into imperial possessions in the Pacific at the turn of the last century.