Ted was born at Rushworth, Victoria on 26 August 1922. He was living with his family in Prahran and working as a French Polisher when war broke out in Europe and the Middle East.
In November 1941 Ted enlisted at the age of 19 in the Citizen Military Forces. He was assigned to the 14th Battalion – the Prahran Regiment.
In late 1941, after the Japanese attack on Pearl Harbor and invasion of Malaya, the battalion was called up for full-time war service.
Initially, they were used to build and man defences at various locations around Victoria, however, in April 1942 they were transferred to Western Australia where they became part of the 6th Brigade.
By mid-1942, however, due to manpower shortages that occurred in the Australian economy as a result of over mobilisation of its military forces, the Australian government decided to disband a number of Militia units in order to release personnel back into the civilian workforce.
As a result, in October 1942, while at Geraldton, the 14th Battalion was merged with the 32nd Battalion, to become the 14th/32nd Battalion. As more than 65 per cent of the battalion’s 996 personnel volunteered for overseas service, the battalion was designated as an Australian Imperial Force battalion, meaning that it could be sent outside the territorial limits imposed by the Defence Act.
Ted chose to remain in uniform and subsequently enlisted in the Australian Imperial Force. 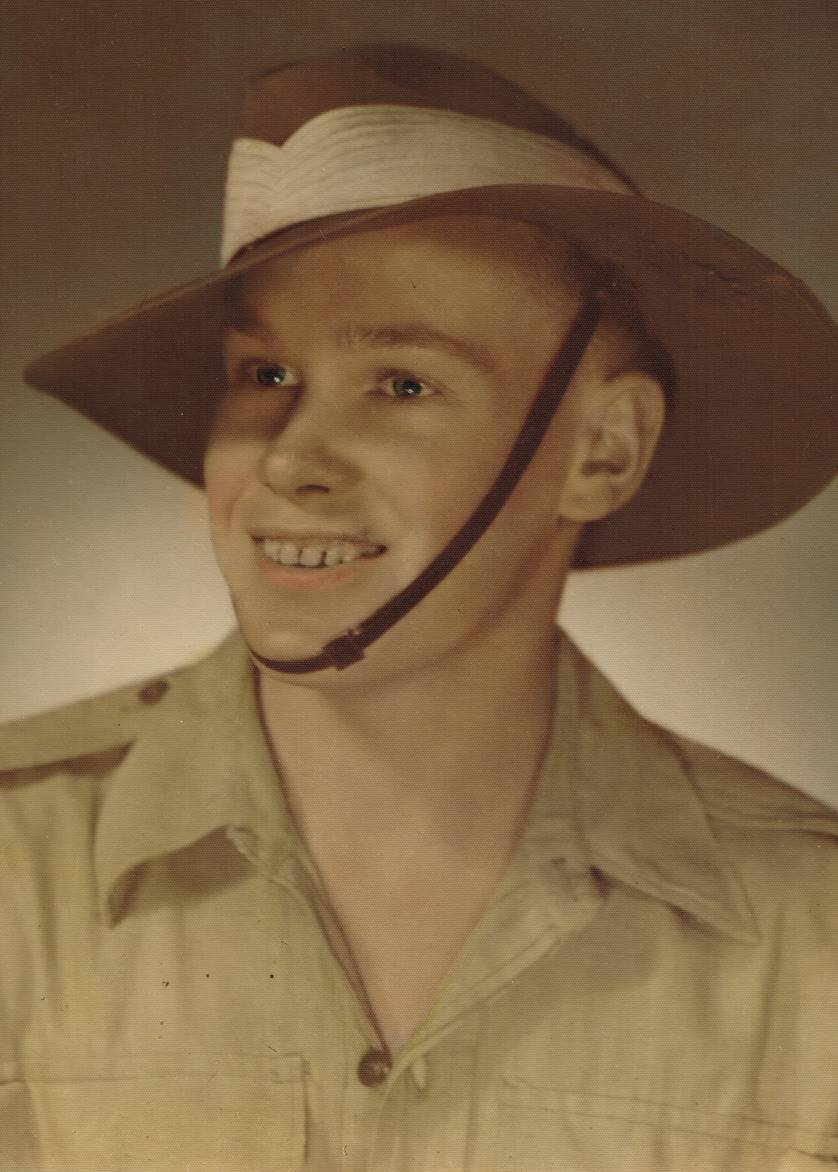 In February 1943 the 14th/32nd returned to the east and underwent amphibious landing and jungle warfare training on the Atherton Tablelands in Queensland. At the start of July the battalion embarked for New Guinea and, after reaching Port Moresby, was flown to the Buna-Gona area on the north coast. The 14th/32nd spent over a year conducting garrison duties and long-range coastal patrols as far north as Nassau Bay. This experience would shortly be put to use when the 6th Brigade was given the task of securing and garrisoning New Britain.
Rather than carry out a major offensive against the Japanese, the much smaller Australian force confined the enemy to Rabaul and the Gazelle Peninsula with active patrolling. The 14th/32nd landed at Jacquinot Bay in November 1944, from where the 6th Brigade pushed up the coast by barge and on foot. By mid-March the 19th Battalion had reached Bacon Hill, the main Japanese defensive position. The 14th/32nd relieved the 19th Battalion and captured the hill on 18 March 1945.
Bacon Hill was the final major engagement of the New Britain campaign and the 14th/32nd’s first and last battle. The Australians established a line across the neck of the Gazelle Peninsula, which they held and patrolled for the rest of the war, but did not move beyond into Japanese-controlled territory.
In April, after almost two years in New Guinea and New Britain, the 14th/32nd Battalion and other units from the 6th Brigade returned to Australia for leave and further training. However, the war was coming to end and the 6th Brigade and 14th/32nd Battalion were disbanded in July.
In September 1945 Ted was re-assigned as a guard to a Prisoner of War camp #5 in Myrtleford, Victoria. In early 1946 Ted was admitted to hospital with Pyrexia – or fever, and discharged from the AIF at the end of May 1946.
In recognition of his service Ted was awarded the 1939-45 Star, the Pacific Star, the Defence Medal, the War Medal and the Returned from Active Service Badge.