War! What is it good for? The role of conflict in civilisation, from primates to robots – Book Review

MHHV > Articles > Book Reviews > War! What is it good for? The role of conflict in civilisation, from primates to robots – Book Review

By Ian Morris Profile, Books: London; 2014; 448 pp.; ISBN 9781781252963; RRP $35.00 (softcover)
Sure to provoke debate War! What is it good for? is a bold and controversial rethinking of the role of war in human history, and how it might shape our future. Ian Morris makes and defends a simple claim; that “over the long run, [war] has made humanity safer and richer.”
Morris argues that “War has produced bigger societies, ruled by stronger governments, which have imposed peace and created the pre-conditions for prosperity”. While he makes some assumptions, he argues that the chances of dying a violent death have greatly reduced over the long term. “If you lived in the Stone Age, you were roughly ten times more likely to die violently than if you lived in the 20th century.”
Morris also shows that, paradoxically, war is “pretty much the only way” human beings have found of creating larger and more peaceful societies. Without war, we would never have built the huge nation-states which now keep us relatively safe from random acts of violence.
And not only do wars make us safer, Morris goes on, they make us richer: “By creating larger societies, stronger governments, and greater security, war has enriched the world. It is thanks to war that we live longer and more comfortable lives than ever before.”
Morris supports his arguments by examining war from prehuman times to our own. In his trademark style he combines inter-disciplinary insights, scientific methods and fascinating stories as he masterfully blends the historical, the sociological and the philosophical dimensions.
Morris teaches classics, history, and archaeology at Stanford University. He has published 11 books and is the bestselling author of Why the West rules – for now: the patterns of history, and what they reveal about the future. Morris is renowned as a great thinker, but is regarded by some as a scholarly ‘shock jock’ who loves to terrify readers by challenging long-held assumptions, and outrage them with ‘politically incorrect’ assertions.
Morris might overvalue war as a means of state-building and undervalue trade and technology, as states also mature as a consequence of economic changes and innovation. But by placing emphasis on war, Morris aligns his thinking with lawyer and academic Philip Bobbitt who in his 2002 epic The shield of Achilles: war, peace and the course of history argued that states have evolved in stages as a result of what he termed ‘epochal wars’.
While war can make a state stronger and gain a monopoly on the use of force internally, the question of why states go to war is not dealt with comprehensively. Morris postulates that because states exist, war exists; not only for states to gain power relative to each other but to grow the amount of power to be shared among them.
Considering the future in his last chapter, Morris is less clear cut. The optimistic Morris thinks that technology and the interconnectivity between individuals, coupled with the ascendancy of a rules-based global order, might succeed the ‘globocop’ role presently filled by the United States; and as a result wars will become less frequent and smaller. The pessimist Morris considers the fact that the arsenal of thermonuclear weapons is capable of potentially exterminating all humanity. An all-out nuclear war would likely disprove Morris’ thesis … among other consequences!
But with the number of states steadily growing, the increasing effect of globalisation, the reducing prevalence of inter-state wars, the proliferation of violent non-state actors and robotic systems, I don’t think there are any clear correlations or forecasts possible here.
War! What is it good for? will appeal to a broad cross-section of interest groups in addition to military historians and practitioners. It includes a large number of tables and figures, extensive endnotes, a comprehensive bibliography and detailed index. It also includes a large further reading section which will be useful for academics. I commend it to you and I congratulate Ian Morris for exploring such a controversial and important question. 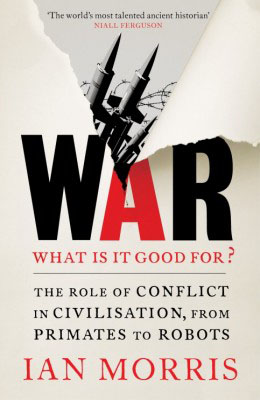