In Winning the Peace, Dr Andrew Carr examines the question of Australia’s position and influence on regional and global norms as a ‘middle power’ in the period 1983 to 2013. He does this by critically examining three ‘campaigns’ for change in the Asia-Pacific; irregular migration; weapons of mass destruction; and trade liberalisation. Winning the Peace is quite focused in its scope and academic in its approach and style.
Winning the Peace explores how Australian governments have engaged with Asia over the last thirty years, attempting to use their defence and foreign policies to shape the region. While there were times of tension during this period – such as the spikes around the end of the Cold War and during the early years of the War on Terror – the Asian region has been largely defined by peace. Because of this peace and thanks to Australia’s relative size as a middle power, governments’ attempts to change how other states act and think has not been through the use of force, but by military and diplomatic engagement and persuasion.
Australia’s resource limitations have also meant it has had to be strategic in its efforts: to determine which changes were priorities, to reorganise and develop resources, to deploy those resources effectively and efficiently, and to sustain its efforts in the face of competition and rejection.
Carr finds that “Australia has been able to act as a norm entrepreneur and a norm diffuser at the regional level, but found that there is comparatively little evidence of acting as a norm stabiliser or substantive global influence.”
Carr is a research fellow in the Strategic Defence and Studies Centre at the Australian National University. His publications include work on Australian foreign and defence policy, middle power theory and Asian security. He is the co-editor of Australian Foreign Policy: Controversies and Debates (Oxford University Press, 2014) and Asia-Pacific Security (Georgetown University Press, 2015). Andrew is also the editor of the Centre of Gravity policy paper series, and a co-editor of the peer-reviewed journal, Security Challenges.
Winning the Peace has extensive end notes for each chapter, a comprehensive bibliography and detailed index. There are no maps, images or tables. Winning the Peace will appeal to international relations students as well as to defence, security and foreign policy officials concerned with Australia’s regional engagement. 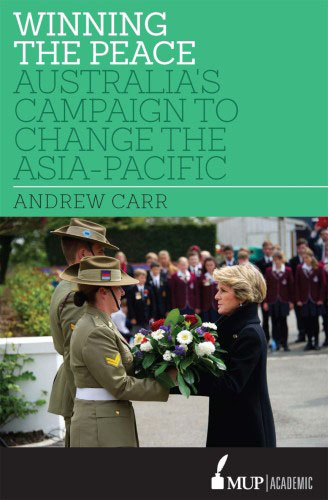