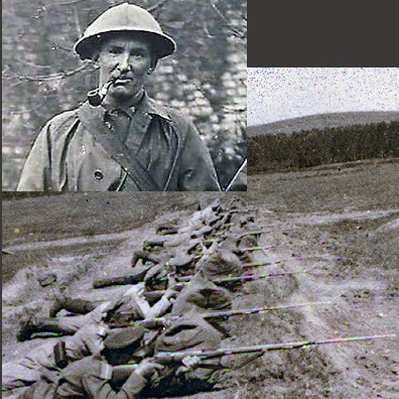 In late 1918, thousands of Australian soldiers, exhausted and scarred from the conflict in Europe, began to head home to loved ones down under. However, one ANZAC headed the wrong way, toward more conflict and risk in vast and frozen Siberia. This is the story of Ernest Latchford, told through his articulate, observant letters home from three very distinct theatres of war.

Ern Latchford was one of the early recruits to newly federated Australia’s embryonic militia and when war did break out in 1914, he was very reluctantly held back to train the battalions that were soon to land in Gallipoli. He finally reached the Western Front in 1916, and served with distinction through the bloody battles of Messines and then Passchendaele, where he was to earn a Military Cross, during that latter futile disaster. In early 1918, he (among a handful of other Australians) was personally selected by General John Monash to serve in the “Hush-Hush” Dunsterville campaign in Persia. His particular responsibility was to train Armenian refugees against the Ottoman Army (and to protect the oil wealth of the Persian Gulf). At the end of the war, instead of returning to Australia, he became the only Australian to be deployed in central Siberia to train White Russian forces against the Bolsheviks during the Russian Civil War.

Every week, irrespective of location, intensity of battle or injury he wrote to his fiancé, Linda Dehnert in Western Victoria. These previously unseen letters, often many pages in length, were always passionate and vivid as he describes the politics of the conflict and the horrors of the battles, especially the loss of much- loved colleagues. He eloquently described the cities and towns he passed through and the variety of nationalities he came across, including French farmers and villages; the Arab, Armenians and Persians of the Middle East and finally the Russians, caught in a bloody conflict that would have ramifications for decades. In between, he wrote romantically of his courtship of Linda and the joy of life at home on the family farm named Lily Vale in Western Victoria.

Mark Latchford was born in Canberra and is a graduate of the University of Sydney with a Bachelor of Arts (Modern History, Political Science, Economic Geography). He had a successful corporate career with the IBM Corporation, including senior executive roles in Australia, Japan, France and Hong Kong. Post retirement, he consults in the public and private sector while pursuing his passion for history, biography and adventure travel. Mark has travelled to over 130 countries, which included research for “Letters to Lily Vale”.

The book can be purchased via Letters to Lily Vale | Openbook Howden Print & Design https://www.openbookhowden.com.au/product/letters-to-lily-vale/

or from the author: Mark_Latchford@hotmail.com