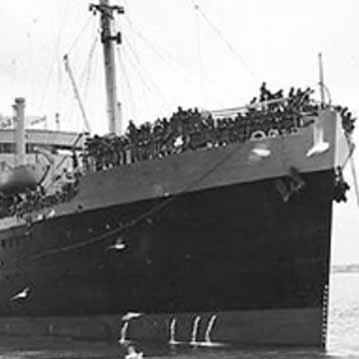 During this presentation Phil Dressing will tell a very personal family story of the “Dunera Boys”.

His father and his two brothers were brought up in a German orientated orphanage in London. They were interned in the UK in the mid-forties by the Government fearing a fifth front on home shores. Informed they were being banished to Canada and they were put aboard the Aranadora Star, a converted Blue Star Passenger Liner.

The ship, unescorted, was torpedoed and sunk by U47 with tremendous loss of life. The vessel was carrying far more passengers than life saving capacity. All three brothers survived and a very short time later found themselves on the HMT Dunera bound for Australia.

2,542 internees left Liverpool on the ‘hell’ ship bound for Australia. The Dunera was dangerously overcrowded and the internees were kept in quarters below deck, with limited access to fresh air or daylight. Conditions were unhygienic, with the putrid stench of vomit, urine and unwashed bodies. The internees suffered from poor rations, inadequate medical care and regular beatings from the British guards. Despite the hardships on board and in Australia, 900 elected to stay in the country.

Upon arrival, they were interned at Tatura, Victoria. Towards the end of the war with Germany, the boys were offered to be returned to the UK or join the Australian Army. They chose the latter and served in the northern islands fighting the Japanese.

All three survived that experience, returned to Victoria, married, raised families and went on to become successful businessmen. The Dressing brothers did not tell their siblings their life story. In Phil’s father’s case, not until his wife, Jean, passed away some thirty years ago. When he was asked why he kept the story to himself, his father replied that he was afraid his sons would think less of him being of German origin during the war.

This is their story. 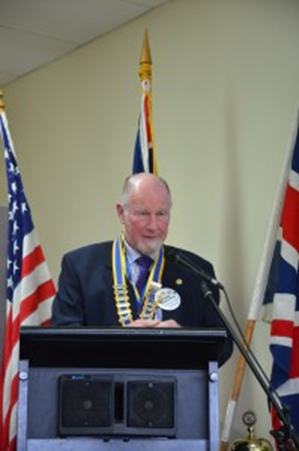 Phil Dressing is General Manager of the National Vietnam Veterans Museum, a position he has held since November 2016. Not a Vietnam Vet himself, he was in the last National Service ballot in September 1972 at the age of nineteen years. His date was not drawn but Gough Whitlam, elected to lead our Country in December 1972, on a platform of anti-war, anti-conscription, immediately dismantled National Service. It was unlikely Phil would have served even had his number been drawn. He was provided a temporary exemption at the time.

He was born and bred in West St. Kilda, which explains his love of the St. Kilda Football Club, and was schooled at Middle Park State School and Caulfield Grammar. His early career was Industrial Risk Management/Occupational Health and Safety, becoming Pilkington (industrial, domestic and automotive glass manufacturers) Australasia’s Risk and Insurance Manager. After a move to Phillip Island he managed the local golf club for eight years, worked in real estate for two years and then worked for the Phillip Island Adventure Resort for ten years. He has been married to Jan for over forty years. They have two sons and four grandchildren. Despite his ample girth he plays golf and pedals around Phillip Island on a regular basis.