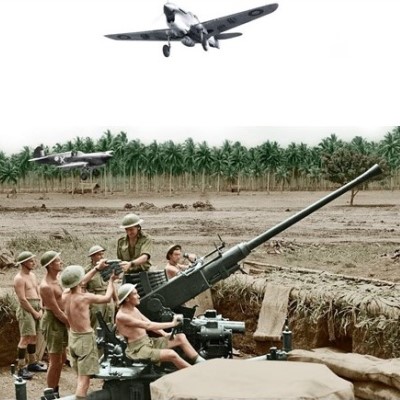 Michael Veitch, actor, presenter and critically acclaimed author, brings to life the incredible exploits and tragic sacrifices of the Australian heroes in the epic story of the Milne Bay campaign of 1942 – which saw Japanese land forces suffer their first defeat of the war – and has properly been called the RAAF’s forgotten finest hour.

NOTE THE CHANGES TO DATE AND VENUE.

September 1942 marked the high-point of Axis conquest in World War II. In the Pacific, Japan’s soldiers had seemed unstoppable. However, the tide was about to turn. On Sunday, 6 September 1942, Japanese land forces suffered their first conclusive defeat at the hands of the Allies. At Milne Bay in Papua New Guinea, a predominantly Australian force – including 75 Squadron (fresh from their action in 44 Days) – fought for two weeks to successfully defend a vital airstrip against a determined Japanese invasion. The victorious Australian army units were crucially supported by two locally-based squadrons of RAAF Kittyhawks. The Battle for Milne Bay and victory for the Allies was a significant turning point in the Pacific War, but while it received worldwide publicity at the time, it has since been largely forgotten… It deserves to be remembered.

Michael is well known as an author, actor, comedian and former ABC television and radio presenter. He appeared on the sketch comedy television shows The D-Generation, Fast Forward and Full Frontal, His books include the critically acclaimed accounts of Australian pilots in World War II, 44 Days, Heroes of the Skies,

Due to limited street parking you may wish to arrive via train or tram.
The RHSV venue is a short 3 minute walk from Flagstaff train or tram station
(Left into Williams Street then right into A’Beckett Street with the RHSV on the near right)